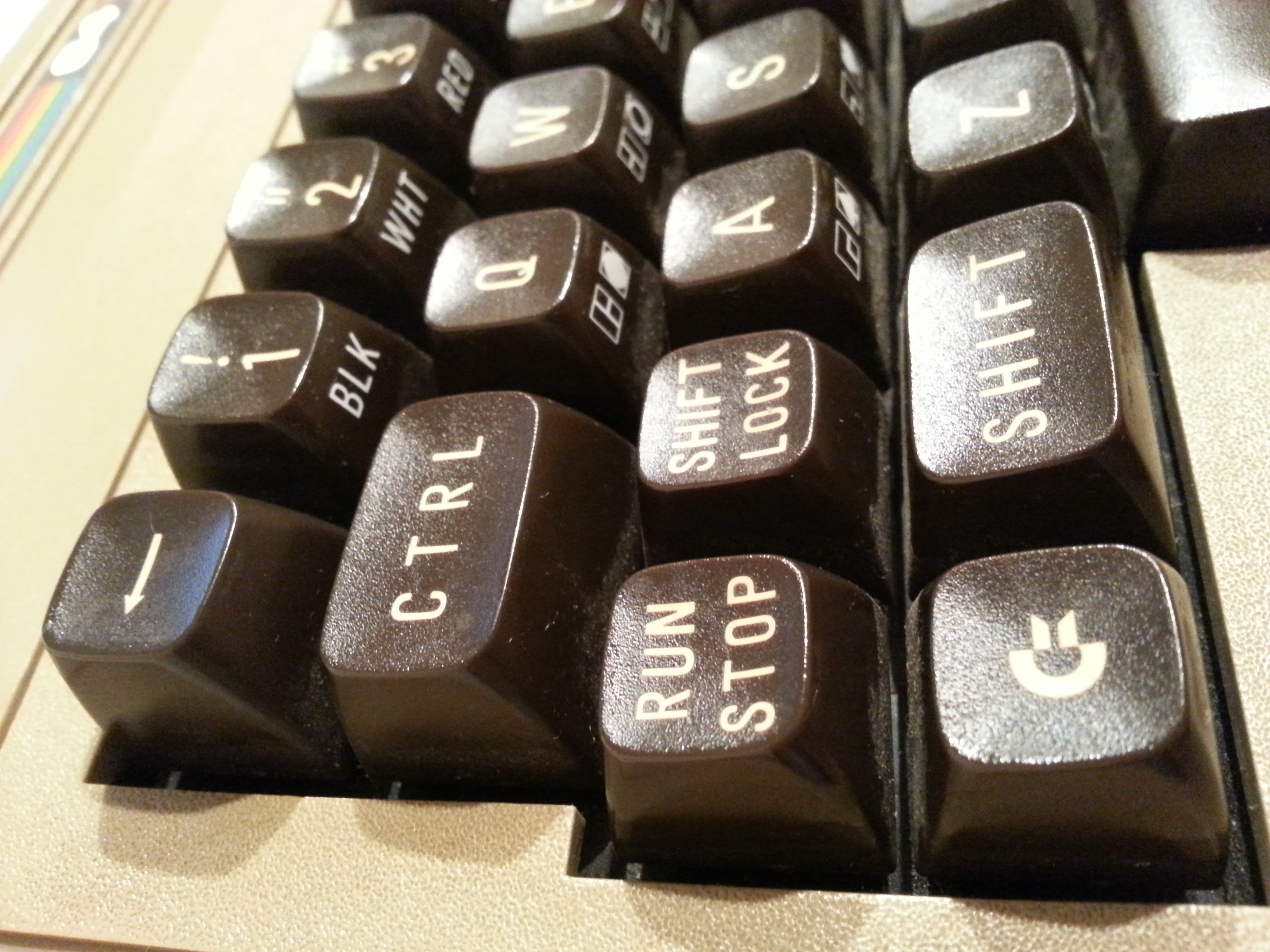 Having encountered the first version of Elite on a Commodore 64 it seemed fitting that the newest incarnation, Elite: Dangerous, that’s currently in the works over at Frontier should be played on a similarly awesome machine.

While it’s still too soon to call out the exact specs that will be needed to run E:D I’m going to hedge my bets and assume that a machine that’ll run today’s heavyweight titles may be up to the task in around a year’s time.

So here’s where I’m going to start;

Yep, that’s a genuine 80s-issue C64 and if things go to plan, it’ll be running the first round beta tests of E:D in a few months time. But first a quick look at the challenge ahead.

According to a FAQ page tucked away on the UbiSoft network, the minimum system specs needed for Far Cry 3 are as follows;

And the specs for the humble C64 are;

Looks like there’s a bit of a gap that needs to be filled if I’m going to end up with a machine that can provide just the minimum requirements for Far Cry 3, and I reckon it’d be reasonable to assume that while it may be enough to get the early beta builds of E:D going, the final version could need even more muscle.

So having done a bit of sniffing around on the Internet (specifically Tom’s Hardware) I have the beginnings of a shopping list;

That lot is courtesy of Aria

I’d better start saving. But the funny thing is that the total isn’t that far off what the C64 retailed for at launch.

Tune in again soon for the next thrilling instalment.

After some time out doing other things I’ve finally got this project back on my to-do list and ordered the first of the parts that I’ll need to get this puppy up and running.

And first up, it’ll be the USB  interface that (I hope, if I can build it right) will enable this old beauty’s keyboard to talk to a regular PC. That on it’s own will be fun I’m sure.

Later on, I’ll get to ordering the rest of the components but beyond building and testing the aforementioned USB wedge, there probably won’t be much more to report for a bit as a) I have to save funds for the up-coming orders and b) I don’t want to buy a mobo and CPU etc. too soon as there’s a chance I’ll get better specs for the same amount if I hold out for a while.

Having said that, I’m up against a self-imposed absolute completion deadline of March 2014, as that’s when Elite: Dangerous is due to be released. However, there’s the beta testing to think about before then, and it’d be really nice to do that on this machine.

For info, the USB keyboard wedge I’m going to try out is the C64Key which you can find out more about here: http://symlink.dk/projects/c64key/ and I ordered the components for that from Rapid Electronics (http://www.rapidonline.com/) and here’s a copy of the order lines (hopefully the product code links will still work for you);

Although I don’t need all those items, I figured I should have a few spares for the inevitable screw-ups that I’m bound to make. And to be honest, it’s difficult to find anywhere online to order them without paying an exorbitant rate of postage. It’s on the breadboard, next is to install the ATMega and work out how to add a USB connector. I wonder if it’ll work :-/

I’m not feeling brave enough to face disappointment tonight though…

It’s now just over a year since the Kickstarter finished and the alpha 2.0 test is well under way. Frontier published the minimum hardware specs for the alpha as follows;

Frontier say that the final required specs will probably be a bit less than those due to code optimisations that are yet to be made. However, that’s a bit more than I’d initially planned, and I’m on the list of beta testers so I reckon it won’t be long until I need this box up and running.

Also, having had some time with the old C64 keyboard (which didn’t work by the way), I now remember why any time spent entering code on that particular hardware seemed like way more than had actually elapsed. I think I’ll sacrifice some originality and cut in a more regular PC-style keyboard, if I can find one to more-or-less fit.

The premium beta phase has started, and at long last I’ve committed to a set-up. 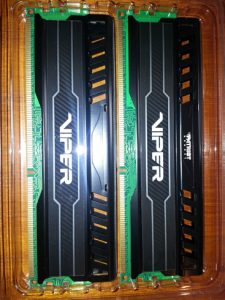 and an MSI Z871 motherboard 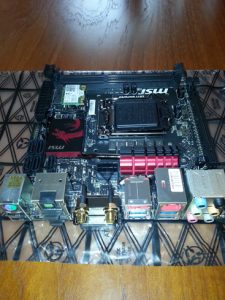 These are due for delivery next week, so then I’ll find out if there’s any chance of squeezing this into the C64 box. It may end up with a hot-rod air scoop though.

As yet I haven’t ordered a PSU or graphics card. I’m going to test-build this first and see what it can do as-is, re-using an old PSU, HDD and maybe an old GFX card, depending on what the on-board GFX are capable of with that beefy CPU and not insignificant amount of RAM.

The kit arrived, but it looks like the package has had a bit of a rough time of it. 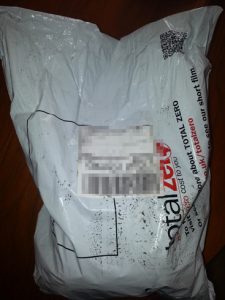 Once opened, things are looking a bit better, but that CPU box has obviously suffered. Let’s hope the contents are ok. 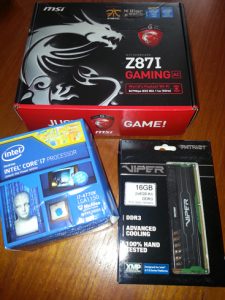 So the motherboard comes with a pleasing collection of odds and ends. WiFi antennas, SATA cables, a nice sticker and a handy door hanger! I think MSI are keen to let folks know that this is a gaming board. 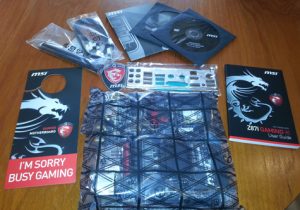 Opening up the mobo bag, the board feels reassuringly heavy, and surprisingly thick. It’s adorned with plenty of sockets for stuff, and a chunky heat-sink which I presume will be keeping the on-board graphics chipset cool.

After the mobo, the RAM modules. Again these are nice to handle (being cautious to avoid static mishaps of course) and the heat-sinks over these are also quite substantial.

Finally the CPU and cooler are extracted from their slightly stressed-looking box but everything looks ok on the inside.

And so to assembly. There were no problems mounting the RAM or CPU on to this board. This is the first machine I’ve built for a few years and things have changed a bit since the dual-core days of old. The first thing that struck me was the absence of pins on the CPU. The socket 1150 (and maybe previous socket versions) replaces these for flat pad contacts. This is much nicer if you ask me as those pins on older CPU generations were quite fragile and easily compromised.

A quick layer of thermal compound smeared over the secured CPU and the cooler was ready to mount too. I’m curious about what look like thermal compound pads on the underside of the cooler, and the absence of any additional compound in the package. This suggests that I might not have had to add any compound directly to the top of the CPU, but I wasn’t taking any chances and went for it anyway. 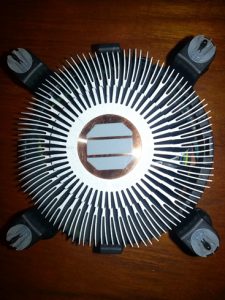 So now to find a few additional bits and pieces so I can fire it up. I borrowed a 300W ATX PSU from the 3D printer, a 2.5″ hard drive and the power switch(!) from my games table project and a wireless keyboard with mousepad from the Raspberry Pi and the HDMI lead from the DVD player. When they were all plugged in she was ready to go and sure enough, on the first press of the power switch, we’re in business. 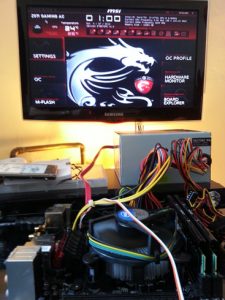 I decided to let it sit like that for about 30 minutes or so. Not really doing anything but just watching the temperature graphs, in case I had over / underdone the thermal compound. But the CPU settled out to around 40°C, so it’ll be interesting to see how much that changes when it’s under load.

All the RAM showed up, and the CPU reported itself correctly so as far as this stage of the “build” is complete, we’re looking good. 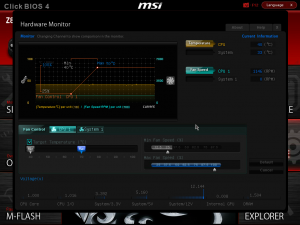 The other thing I like about this board is that the PCI-E slot is up against the left-hand side, as viewed from the front of the board, meaning that if I have to go for a discrete graphics card (which is likely I suspect) then I hope to be able to lay it on its side in the C64 box by using a short ribbon cable connector, thus keeping the overall profile on the low side.

Anyway, that’s all for now. I’ll be back again when I’ve got some software ready to go.

It’s kind of a tenuous but appropriate observation that today, Star Wars day (May the fourth… see?), I installed and ran Elite Dangerous on this machine for the first time. AND IT ROCKS!

I’ve written up a description of the build process over here.