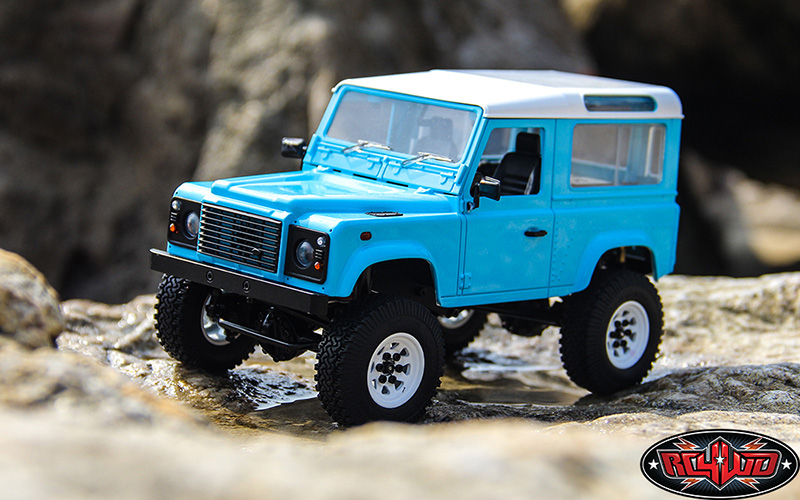 I love this little ready-to-run Land Rover D90 by RC4WD, but there was one thing that properly bugged me from the start: Removing the body shell to switch it on and off 😠

The XR2 radio receiver / ESC sits on top of a metal plate that’s secured to the chassis. Which is great, but the body shell is screwed to the chassis and the power switch is located on the top side of the RX/ESC, rendering it unreachable without removing the shell fixing screws.

I figured I’d try a couple of small tool-free mods (e.g. just the basics – screwdrivers, pliers, hot glue etc) to shift things around some, including perhaps moving the battery up front instead of having it way back over the rear axle.

However, try as I might there was just no way the battery was going to live in the engine bay without more aggressive surgery, so I figured maybe by rearranging the XR2’s configuration I could make some room for the addition of up-front weights, so that’s what I ended up doing.

By rotating the ESC and hot gluing it directly to the steering servo, the switch just about becomes accessible from underneath, and there’s no need to remove the body to get to it any more. I had to put a 90° bend in the steering servo connector pins but that was easy enough – and that connector is now flush against the underside of the bonnet when the body is mounted, which may help to minimise disconnection due to vibration. There’s plenty of slack in the servo cable though, so that can be unwound if needs be.

While this configuration potentially exposes the ESC to water and crud from below when you’re driving, I don’t think it’s significantly worse than it would be in its default position, and I don’t expect to be running this through water deep enough to cause a problem anyway.

The plate that the ESC was mounted on is now free to be loaded up with something heavy enough to offset the still rear-mounted battery, but I’m going to have to put a 90° bend in it first, because it’s now rotated through 180° and the narrow part (just visible behind the battery wires in the above photo) obstructs the underside of the interior when the shell is refitted.

When that’s done I reckon some wheel weights or something will sit there quite happily and help to keep those front tyres in the dirt.

Anyway, this is a really nice little ready-to-run truck and now it’s a lot easier to switch on for a five minute crawl across my desk when the urge strikes. Next I just have to figure out how to make it run a little quieter because it does make some weird noises, but I’m not sure if it’s the ESC or the motor. Have a listen and tell me what you think (ignore the background rumble, I think that was my computer).