RT @mashable: This unassuming robot could sneak into your home https://t.co/v595cbwP6l

This unassuming robot could sneak into your home pic.twitter.com/v595cbwP6l

Day 4 of 7 of #photosofmylife (a picture a day for a week, no people and no explanation) pic.twitter.com/N1qTys3ias

Day 3 of 7 of #photosofmylife (a picture a day for a week, no people and no explanation) pic.twitter.com/lFkm85A994

"underscores the risks associated with users bringing their Facebook data to other parts of the web … For example, Cambridge Analytica was able to obtain information belonging to up to 87 million people because users shared their Facebook data with a personality test app" https://t.co/l8SDnT8QFD

Hello everyone. As you know, I have been writing a sailing book for SOME TIME and I would very much like to talk to a serving navy officer; does anyone know anyone who does that and might put up with me for an hour?

There are SO MANY things I want to learn about and do, and such a vanishingly small amount of time in which to try. Guess I'll just have to accept that it's impossible to get to all of them. Come on medical science, grant us longer (healthy) lifespans?

How are you pronouncing _quant_? 😆

Day 2 of 7 of #photosofmylife (a picture a day for a week, no people and no explanation). Still not nominating anyone in particular but join in if you feel the urge 😍 pic.twitter.com/tZm9spdQdu 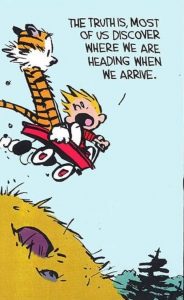 When 2020 rolled in, the inevitable questions about resolutions began to circulate. I pretty much gave up making those a few years ago, replaced more recently by more achievable wish-lists, but over the last couple of days one of those questions in particular is still bouncing around in my head:

There are so many things going wrong in the world right now that are distressing, and in many cases frankly dumbfounding. These seem to be mostly driven by the kinds of people who are motivated by greed and self-interest, the kinds of people I want to have absolutely nothing to do with. So how do I escape, where do I go, what will I do, and will my loved ones want to come and do that whatever that is with me?

Quite a big challenge to fit into a new year’s resolution. Let’s break it down some…

First, what to do? Buying and selling? Making? Creating?

The first two of these require cash upfront and a solid plan and an identified customer base. Making has the additional demands of actually being skilled enough to create physical things for which there is a demand, or a demand can be established. And both require significant effort in marketing, sales (neither of which are really my forte) and all the other trappings of those more traditional business models.

I don’t currently have a grasp of anything that I could buy and resell for profit, so that’s a non-starter for the time being. I did try that with robot kits and accessories about 20 years or so ago and learned a lot from that experience, but I don’t intend to go back to that anytime soon. I’d very much like to be a maker/seller, but that’s not where I am right now and there are so many very talented people out there making beautiful, unexpected things every day.

So can I be a creator? That feels like a better fit with what I know and do, so it seems like it could be a natural progression. Let’s think about it some more.

I’m going to need this in quantities that I just don’t currently have, and it seems that the clock is running down faster than ever.

I have a job with an organisation that I am genuinely proud to be a part of, and the work itself is usually satisfying eventually, but it isn’t ever going to make me enough cash to make any significant changes. And with the self-inflicted disaster that is Brexit now only a short time away, the plans I did have will die along with our EU membership.

There are a couple of ways I can think of to attempt this, both of which need lots of time and energy, and while I’ve already made a start on those ideas, they’ve been slow going.

The first is game development – and while my efforts thus far are not going to have any tangible effects on the solution, the knowledge I have gained, and continue to acculumate, is undoubtedly going to be useful. But, do I want to be a game developer in the traditional sense? Not really, no. It’s something I want to do but as and when I want to, not because I have a deadline or some other employer to keep happy. If I could invent the next Flappy Bird or something then things would definitely be on the right track in this area. Meanwhile I’ll keep experimenting and learning.

Next is writing, and again I’ve got a couple of irons heating in that particular fire too. At this stage it’s more about the practice and figuring out my own style and I’ve already learned a lot from what I’ve done so far, not least that I don’t think that I think like a writer. I imagine things out of order, almost like scenes from films, capture them and weave the ones that work into the story, keeping the others nearby in case they fit some other use case. Maybe I’ve just been a software developer for too long and need to find more traditional storytelling structure in order to move this along.

But I’m having some fun with this too – writing up the exploits of lunchtime D&D sessions at work, for example.

Should I stay or should I go? (I’m not going anywhere if my loved ones don’t feel comfortable with the move, by the way)

I think it’s fair to say that I’m fed up with the UK’s politics and agenda. I love the country’s geography and variety, but I think we’re an embarrassment on the world stage these days, and I really want not to be associated with that any more. But where to go?

My language skills are a bit poor, but I think I’d pick that up as a result of just being in another country. I’m concerned that even getting a foot in the door, especially within Europe given recent stupidity on our part, will be particularly challenging. Adding my advancing years and lack of a degree into the mix is also going to complicate matters. For any kids reading: work hard at school, learn everything you can, even if it seems like you’ll never make use of the things you’re being taught. You’ll be giving your future self many more options if you do.

Solution(s): A fast-track route to a degree through an online university/course? Language apps? A stronger portfolio of work done/published?

None of these are impossible – it’s (I think) a lack of time that’s problematic. I’ve already made public some of the game dev work I’ve been doing, and have set up a site through which to share the writing projects too.

As for exactly where to relocate to, that’s for a much longer conversation yet to be had.

This is the killer. As the years pile on, time – in terms of available, quality concentration time – is ever more scarce. However, now that the shortest day of the year is behind us and the days begin to get longer again, I’m hopeful that the brighter evenings will help to stay alert for a little longer and allow me to stretch my day out more than is possible through the winter months.

The former of these is potentially easier to implement but it has to be compatible with demands of work, and those change from time to time so it must be flexible, perhaps making routines a little more difficult to establish.

The latter would be ideal from the perspective of having reliably structured time available, but there are ramifications in all directions: income, obviously, would be decreased, which then has an effect on pension contributions – something that is already in need of some boosting from somewhere. Everything that is pro rated through work would be proportionally reduced, and those effects need to be considered and calculated.

There may be one other possibility: a sabbatical. As a one-off thing when one or more projects are close to completion, this may be viable to provide necessary focus and opportunity to wrap it/them up. However, this would be unpaid, so again many calculations are needed before pursuing this line of inquiry.

Ultimately, while I’m still working for an employer, any and all of these will depend on their approval.

Finally, and most importantly of all, everything here needs to be compatible with my family and their expectations. Many conversations have already been had, and I’m immensely grateful that I have their full support.

So, 2020, are you going to be the year that some or all of the above starts to resolve itself, in a new year’s resolution kind of way?