RaspberryPi where art thou?

Is this possibly the most thinly veiled delivery of bad news I’ve ever seen?

Breakthroughs. Exhilarating, but rarely without hiccups.

A few days ago [12 days ago actually Farnell!], the Raspberry Pi Foundation announced a small manufacturing delay. A component in the Pi is being reinstalled. In the grand scheme it’s small potatoes – but we know it’s frustrating for Farnell element14 fans and customers.

Congratulations – Farnell element14 will deliver your Pi to you around early May.

We’re a proud partner of the Pi, and the sense of adventure it’s bringing to the tech community. We’ve all come to feel part of the Foundation’s big project to bring computing to all. Online, the response has been superb.

Thanks for your patience and understanding so far. Enjoy your Pi.

Selling my car. Got to shift it quick.

So after roughly 35 years of needing a reason, I eventually visited the Barbican centre at the weekend.

Obviously I’ve known about the place for practically my whole lifetime but never really “got it” before. At first it’s a confusing mass of far-too-much-concrete, a maze of pathways, bridges, alleys and courtyards but once you’re in, and especially inside the main centre, it kind of becomes an experience, not just a venue.

As interesting as it was to explore the seemingly haphazard interior and watch the few performances that were going on on Saturday afternoon, nothing prepared me for what was waiting on the 3rd and 4th floors.

The effect of entering the indoor garden was one of being transported to a dystopian, post-human future, where nature is fighting back against the civilisation that once ravaged it, and winning quite nicely thank you. It’s momentarily like being dropped into the real-world equivalent of Enslaved: Odyssey to the West, but with fewer mechs seeking to extinguish the last remnants of human existence. Even the innocuous name lends itself nicely to a level of such a game: The Conservatory.

That probably isn’t what was intended when it was built. After all that was three-and-some-fraction decades ago, well into the time of nuclear threats and oblivion scenarios but well before such bonkers computer game sci-fi concepts could have been imagined, but it did conjure up those feelings from the moment we passed through the doors. And it did it very well.

Then it occurred to me that maybe my thinking has been altered by playing such games and enjoying such sci-fi journeys for so many years, and thus it felt exciting to be taken there for real for a few moments, at least until the rational-be-sensible brain functions reined in those flights of fancy. But everywhere you look there are (I think) perfect frames of such imaginings, so I tried capturing a few with my iPhone’s camera. Capturing photos with no people in is difficult, but have a look and then decide if I’m on to something, or just mentally skewed…

(it seems something’s gone awry with my blogosphere so until I find out what’s stopping pictures from uploading, these links will hopefully suffice)

Last night I had my first play with an Arduino Uno and a couple of add-on shields, all purchased from HobbyTronics (http://www.hobbytronics.co.uk).

At first glance, it all looked nice and straightforward, a simple IDE, a raft of example source code and quite lively discussion boards dotted around t’internet.

So after the initial plug-in, and upload of “blink” (the hardware equivalent of “hello world”), the first task was to solder the stacking headers on to the three shields I hope to be playing with.

This lead to a hurried trip to Maplin in Camden after realising I didn’t have my soldering iron or associated paraphernalia to hand. Before long the soldering was done (with varying degrees of quality – it’s been a while since wielding a soldering iron in anger) and the time came to plug in the first shield: an XBee shield (http://www.sparkfun.com/products/9976) and WiFly module (http://www.sparkfun.com/products/10822).

Everything seemed to be going well. The WiFly came to life and the LEDs suggested it was busily trying to lock on to the WiFi signal of my router, so a quick look over the user manual for clues as to how to configure the module to make a secure connection turned up some lengthy and initially confusing instructions concerning getting the thing into command mode. Thus after lots of reading, cross-referencing and downloading terminal applications, the little bugger still refused to open up and let me tell it what to do.

And that’s when the real confusion set in. Some blog posts claim that the WiFly isn’t compatible with the XBee shield, but they were posted about (I think) R2.x modules while I have an R3. Others say it won’t run properly on an Uno due to one of the SMT diodes which needs to be removed – a task I don’t think I have the tools or the eyes for any more.

But in true noob fashion I wasn’t going to believe any of that until I had reached the end of every line of investigation I could follow. So I set about finding example code libraries that programmatically set the WiFly into command mode, set up the appropriate network parameters and/or let me start entering commands from the terminal. This all looked great until the compilation errors started to show up. More reading from around the web pushed me to the conclusion that actually, v1.0 of the Arduino IDE “breaks most libraries”

FFS I think to myself. It’s now late, I’d like to see something working but I have to go off in search of an older IDE. Fortunately that didn’t take too long after some clicking around the http://arduino.cc website but even then, some of the library code I pulled from git had to be reorganised before it’d compile. For example, the main source files must be in a suitably named directory directly below /libraries, so having got a nicely structured src directory from git with a load of stuff under there I had to move it and bin the rest of the directory structure. After much head scratching eventually some of the library code did compile and could even be uploaded to the Uno, but still the damned WiFly wouldn’t give me the time of day with its UART so I’m beginning to think that the bloggers were right. Maybe the WiFly really isn’t suited to the shield that claims to be designed for it, at least when it’s mounted on a Uno R3.

But not to be too disheartened, I figured I’d give the LCD shield (http://www.hobbytronics.co.uk/arduino/arduino-shields/nokia-6100-lcd-shield) a go, as this was a self-contained board with well documented examples. More internet reading suggested that screens with a red tab most likely have the Epson driver on them, but in keeping with the tradition experienced so far of course this was not the case for my particular screen. At least my new old IDE compiled, uploaded and and ran the example screen demos perfectly. Sigh.

So that wrapped up a frustrating first evening with the Arduino. Admittedly I have quite a few more comments and suggestions to follow up on, and of course re-checking my soldering efforts, before writing off the otherwise impressive-looking WiFly, but that’s more hardware hacking, and I’m mostly a software kind of person these days.

I’ll write more, and maybe review this entry with more references and citations later on. 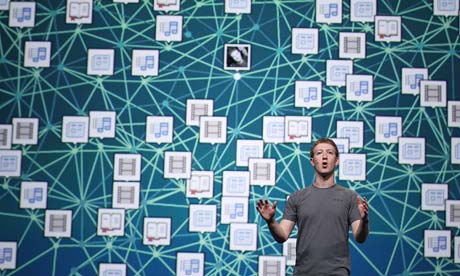 Facebook’s Open Graph technology allows third-party websites to tell Facebook what people are doing. It extends Facebook’s Like button to include any action that the site owners think might be interesting to Facebook. Play a song and your music streaming site tells Facebook what you’ve played. Read a newspaper article and Facebook knows what you’ve read. LOL at a lolcat and your LOL gets logged for all time on your indelible activity record. Facebook calls this “frictionless sharing”, which is its euphemism for silent total surveillance. Once you’ve signed up for this (and it is optional; at least for now) you don’t need to do anything else to “share” your activity with Facebook. It’s completely automatic. The shape of my weekend went something like this…

Travel from Muswell Hill to Blaenau Ffestiniog to pick up this beauty: Then drive her all the way back and deliver her to Surrey.

Last Saturday I was mostly helping to build a geodome.

It went from this: Windows assembled, everything else tagged and ready to go Starting to bolt it together Starting to add the windows Et voila! That's now around 3m to the roof and waiting for the canvas

Went to Cornwall. Visited the Boconnoc Steam Fair (already posted a couple of pics from there). Played inflatable laser quest. Rode a not-so-merry-go-round. Played in a fun house. Bought wetsuits. Bought bodyboards. Went in the sea. Realised I’m not as light as I used to be. Had beach BBQs. Had a birthday. Visited the monkey sanctuary. Built and painted Warhammer figures. Watched DVDs. Ate too much. Drank too much. Had a great time with friends. Beach bonfire. New telly. Relocated old telly. Visited Liskeard and Cawsand. Nearly visited Looe for the second time.

Went back to work. Got stuck in to project that had been keeping me busy before I went away. Glad to say it’s still legible to me (in that I hadn’t completely forgotten it). Made my first unsupervised scala modification. Tested, built and deployed. Didn’t break it.

And so in to the weekend. Helped build a few geodesic dome panels. Hoping to be free to put the rest of it together. Enjoyed lunch and dinner. Looked for badgers. None showed up. Watched more DVDs. More experimenting with scala.

Back to work today (Monday 15th). Wasn’t it a fantastic morning? Second unsupervised scala mod checked in and deployed. Still not broken. Yay. Hoping my luck holds up.

Will add pics when I’ve prepared them so watch this space. If you’re at all interested. – I demonstrate my individuality by not using a sig. Oh, wait…